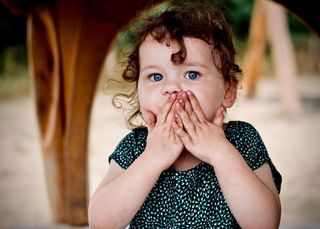 You can’t help but smile when your 3-year-old tells you her pretend friend’s name is HaHa. “No kidding!” her mother laughs.

Because they have no brothers or sisters to play with, people often assume that only children like HaHa’s creator have more imaginary friends than children with siblings. This myth, started by psychologist G. Stanley Hall in 1896 and long-debunked, continues to be perpetuated.

But recently, Japanese researchers Yusuke Moriguchi and Naoya Todo found it is more likely that children with imaginary companions are firstborns. My brother, for example, the firstborn in our family, had George. However, the firstborn finding, like the only child myth, seems questionable in light of responses to my recent query to learn more about imaginary friends.

Caroline from the Mountains, a 5-year-old’s imaginary friend, “came down from the mountains to play with my daughter in a neighbor’s treehouse across the street,” her mother recalls. “Caroline from the Mountains also played with her and her dolls at home; they had tea parties that went on for hours with lots of chatter.” This child, the youngest of 11, had plenty of real-life playmates in the house.

Laurie Ann, the mother of four, says that three of her children had imaginary companions. One daughter’s imaginary friend had green skin and purple hair and her name was Goosella; Goosella would swing from chandeliers. “My daughter made people move because she said they were sitting on Goosella.

“My older son had an imaginary friend, a fly, he oddly called Fido,” Laurie Ann adds, “Fido would talk to him and we had to be careful not to step on Fido. My other daughter had an imaginary dragon friend named Kiki. She asked us to set a plate for Kiki. She also pushed Kiki in a stroller. I think Kiki was rainbow colors.”

Pretend friends, no matter what their “owner’s” birth order, be they flies, dragons, or people, are diverse and can be disconcerting, even alarming, to parents … especially when they don’t understand why or when Fido or George, HaHa or Goosella arrived. They seemingly appear out of nowhere. Starting about ages 2 1/2 to 3 years of age and up to around age 7 or 8 you may notice an imaginary companion or two or more show up. “My Anita had one. It was the cutest thing. His name was Diggy and she used to have conversations with him when she was between the ages of 2 and 4. Then Diggy started bringing more friends around. In came Alan and Janie.”

For children, pretend pals are fun and provide hours of entertainment. Josh, now a teenager, reports that he had 18 make-believe friends all called Little Baby Josh and all four inches tall. “They were clones of me, followed me wherever I went and liked to dance. I was their leader.”

According to Marjorie Taylor, professor of psychology at the University of Oregon and who has written the definitive findings on imaginary companions, roughly 65 percent of young children have them and their arrival often coincides with children’s developing imaginations.

In a conversation with Nursery World, Dr. Karen Majors, an educational psychologist at the Institute of Education at University College London, is emphatic, “It’s about time we did away with the feeling that these children are in the minority or have any kind of mental health problems.” She points out that, “pretend play helps them use their imagination to explore things that are important to them or to help themselves feel better about something. This is all good for their cognitive, emotional and social development.“

Much of the research in the last few decades explains that pretend friends help young children learn about their environment, get along with others, and work out problems. Invented friends can assist a child in managing a life change such as a family relocation, birth of a sibling, a divorce, making new friends. Imaginary friends come in handy for handling uncomfortable situations, as an outlet for feelings they don’t understand or can’t express or as an excuse for poor or destructive behavior. Willa’s son had an imaginary companion he named Oakick. “Every time my son didn’t want to do something or did something he wasn’t supposed to, he blamed Oakick!”

Johnny Harrison’s creator, Ted, neither a firstborn nor an only child and now in his 50s, says Johnny Harrison was not very different from Oakick. “I used to blame everything on Johnny Harrison, a rag doll. When my mother yelled at me it was always Johnny’s fault. I slept with him too. When I got older, he finally had to be laid to rest. Not sure where he went.”

Children’s pretend friends can be invisible, imaginative creations, based on real people or linked to objects such as stuffed animals, toys, or dolls like Johnny Harrison. Elaborate explanations of fantasy friends may be disarming to parents, but they are generally a sign of a growing and fertile imagination. Lily, at the time a 4-year-old and a firstborn, imagined an entire made-up family in Utah, her mother reports. “It was a family of five. I don’t recall their names, but honestly, for a bit, it made me wonder if she was reincarnated. If you sat next to us in a restaurant you would have thought she was adopted and the people in Utah were her real family; we live in Chicago. She chatted on and on about what each person in her pretend family was doing. One of my husband’s coworkers once sent her a huge gift box with the return address, ‘Your Utah Family.’ That’s how convincing my daughter was and how real and detailed she portrayed them.”

Although you may be surprised, perplexed, or concerned when your child asks you to slow down, wait for Phyllis to catch up, invites the Twins on the family vacation, or you overhear your son or daughter chatting away or ordering a “sidekick” around, having an imaginary friend(s) will likely become part of family lore—to rehash and delight for decades to come as Ted reminds us about his time with Johnny Harrison: “The amusing thing is my brother and sister used to bring him up as the years went on and we always had a good laugh.”

In retrospect, most parents see the humor and harmless nature of their children’s make-believe companions. Her 4-year-old urged Kirsten, his mother, from the back seat every time they got in the car to buckle in Bobby, who for reasons unknown, was old enough to ride in the front seat. He didn’t insist on food for Bobby as my brother did for George, but he made sure Bobby sat next to him at the dinner table. Bobby accompanied her son on sleepovers at friends’ houses when he was a few years older.

Kirsten tried her hand at analyzing Bobby: “Maybe my son was tired of having two older sisters bossing him around and wanted a brother, called him Bobby and made him part of the family. His sisters remember when Bobby was starting to die off. They would ask, ‘Where’s Bobby?’ and her son would say in a matter-of-fact tone, ‘Bobby is away right now.’”

Sometimes siblings or friends share imaginary companions who survive to this day. Sisters Laura and Jackie had Miss Nancy when they about 4 and 6 years old. As adults, their memories of Miss Nancy are keen. Laura recalls her as the third character during their playtime: “Miss Nancy was a smart, sassy working woman who spent a lot of time on the phone ordering people around. Miss Nancy was a powerful polyester saleswoman, although I don’t think we knew what polyester was other than what we gleaned from television commercials. Sometimes we put Windex or something in a spray bottle thinking it polyester and washed the windows.

“Miss Nancy was the anthesis of my mother who was a stay-at-home mom and pretty meek. In our imaginations, her husband, Mr. Nancy, was always in trouble, a bumbling fool type and not at all like our father. Maybe we were trying to work out something in our home life.

“I remember Miss Nancy making calls, making decisions; she was a badass. Maybe imaginary friends are who you want to be. I don’t know, but she’s still with us. She spoke with a distinct midwestern accent,” says Laura. “The funniest part is that my sister and I speak to each other this way from time to time and when our kids hear us, they roll their eyes and say, ‘They’re talking to Miss Nancy again.’”

The breadth of children’s creativity seems much more fascinating—and telling—than their position on the birth order spectrum. Dr. Taylor who has been studying children’s imaginary friends for more than 30 years has said, “I’m constantly entertained by what children come up with.”

Any imaginary friends in your house? Please share your or your children’s stories in the comment section.

how to make this $25 high chair look expensive

I pulled my kid from e-learning and have zero regrets

Your NEW Running Workout Calendar is here! Print out the December Calendar for Runners now to join us! And be sure to follow @RunEatRepeat on Instagram for check-ins to help you stay motivated and accountable. Let’s go!! What you get when you join the December…

If you’ve been wanting to try Nutrisystem (or could just use some extra money), now is your chance to win BIG! This November, we’re giving away $300 in Visa gift cards on Facebook to one lucky winner. Use them to try out a Nutrisystem plan,…

Run to the Finish Podcast 134

How to Cook a Delicious Turkey

Very few things instill as much anxiety in the hearts of home cooks as does cooking the traditional Thanksgiving bird. In recent years, there’s been a lot of talk about different and supposedly better ways of cooking your turkey. Deep-frying, brine, smoking, barbecuing. However, when…